Those of you who don’t already know will be very shocked to learn that I was a cheerleader in high school. The point of telling you that, was to tell you this; as cheerleaders, we were assigned a football player or two during the football season. Before games we gave them treats. It was a secret. Except for one fact, my mom made the best brownies ever and all the boys wanted me a secret cheerleader since it pretty much guaranteed them getting a crap ton of amazing brownies. At least that’s how I remember it and I’ll thank you to help me keep it that way.

Some say you can’t improve upon perfection. Those people are full of crap.

My mom’s secret to making boxed brownie mix the bomb.com was to add chocolate chips. Well, her brilliant daughter upped the ante and melted said chocolate chips in butter then added them to the batter.

Then to one-up myself, I added like four handfuls (these are precise measurements) of M&M like candies from the organic section because if it’s organic it OBVIOUSLY isn’t bad for you and then I got all crazy and threw in a few handfuls of mini marshmallows.

At the G store, I was feeling adventurous so we got Lobster Tracks Ice Cream. Don’t worry, it doesn’t contain lobster but lobster colored caramel filled cups. Otherwise known as heaven in your mouth. 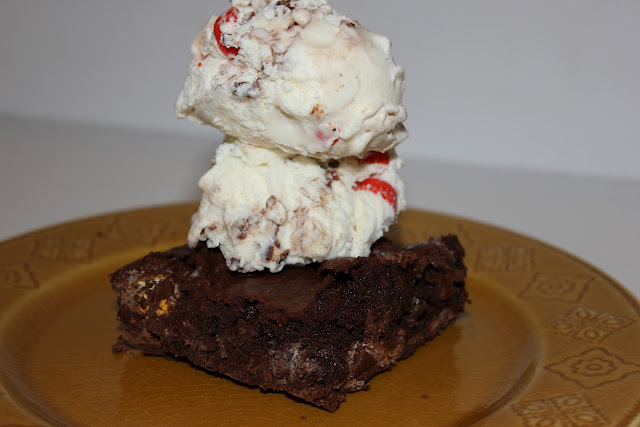