There are a lot of things that I cook that don’t end up on this blog. Why? Because they turn out poorly. Like the ice cream that had too many ice crystals. Or the dinner that just wasn’t pretty enough. How about when I caught a spoon on fire. And not to be out done by myself, I turned around and caught sugar on fire…the same night.

I realize that this little snippet makes this sound more like a food blog than a place for laughs, but if we can’t laugh at ourselves when we royally screw the pooch, then there is no point for this blog. I’m not going to pretend that the ice cream debacle of 2k12 didn’t make me miserable for a few hours. Or that I didn’t pout around the apartment after I tried to burn down the building. I did. 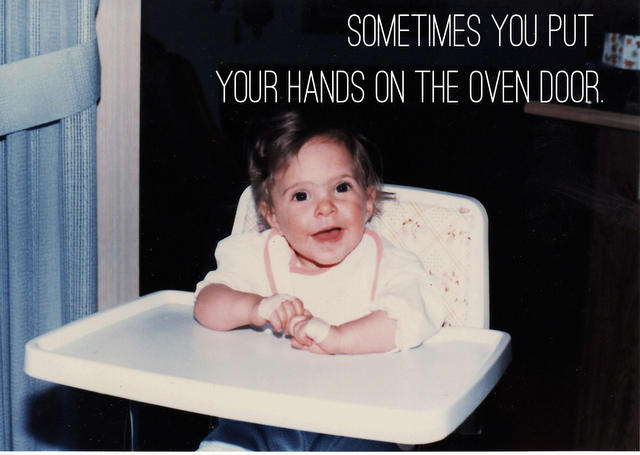 Does that baby look like a grown ass woman that you may know? Well she should, because that’s me. Don’t mind the hair…it gets more nuts as I get older. But see those little hands wrapped up? I burned the shit out of them on the oven door.

It’s a long story that I’ll make short. We’ll start with my mother making potatoes for the family (obviously mine were to be mashed) and asking my brother what he wanted. In the time that it took her to ask him, I had walked over to the oven door and used it as a resting place while learning to walk. Consequently, no one had their potatoes and we spent some time in the emergency room. I also had a black eye that day, so it’s a good thing CPS didn’t take me away from my parents.

But I tell you that, to tell you this; sometimes when we’re trying new things we’re going to screw up and make mistakes. It’s just part of living. If you don’t fail, you’ll never learn.

I think a lot of the time, especially as bloggers, we get caught up in everything being perfect because that’s what people want to read and I don’t think that is totally true. Sure, people enjoy looking at pretty photoshopped pictures and your perfect boxed cake mix cupcakes (you freaking fraud) but that’s not real life. So that isn’t what you’ll get here. I’m not trying to create a facade that my life is perfect, because it isn’t and neither is yours. The sooner we all figure that out, the better off we’ll all be.