I stand firm by my beliefs that the crock pot is the world’s greatest invention. You’d have to be a real doofus to mess something up in there and better than that, it doesn’t heat your whole apartment up when it is a bajillion degrees outside. Consequently, we’ve been eating a lot of chicken tacos. This is mostly due to the fact that I’m a creature of habit but mostly lazy.

But then one day, I thought…hmmm how about I dump this here chicken into this here crock pot with a bottle of BBQ sauce. And this recipe was born. 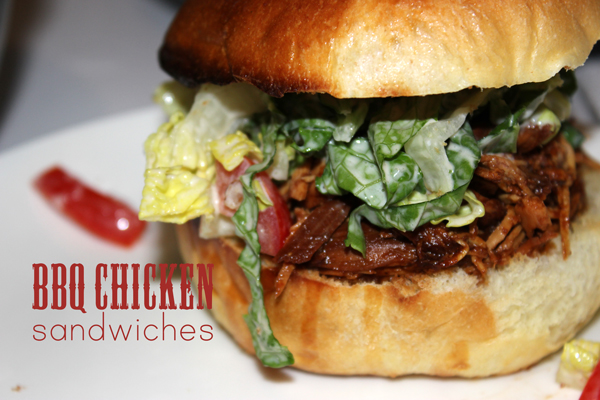 Nope, that isn’t coleslaw because my boyfriend hates it, so I was forced into being creative. Instead, I made a chopped wedge salad and put that on top. I highly recommend this because it was really easy and tasty.

Set the crock to high for one hour and then down to low for about 4-5 hours. Once that is done continue making the…

Chop all ingredients and throw into a mixing bowl. I used this recipe for the dressing and it was amazing. Toss with dressing. Toast your buns because it’s better that way. You can add more BBQ sauce or use the dressing on the buns, whatever floats your boat. Pile on some chicken and some of the salad. Ta freaking da!